What is natural gas?

Natural gas is colourless, flammable gas which can be found in penetrable mineral types in the earths crust. Usually found together with crude oil. The gas is formed by decomposition of organic materials. Natural gas is mainly composed of hydrocarbons, which exist in a variety of different forms. Natural gas is predominantly made up of methane(75 – 95 %), ethane, butanes, propane and nafta. The gas is built up of hydrogen- and carbon atoms and as such often called hydrocarbongas. We make distinctions between rich gas, wet gas and dry gas.

Hydrocarbons are called “energy in a can”. They are composed of carbon and hydrogen. A carbon atom binds to four hydrogen atoms and makes up methane or CH4. The enery is liberated when heat is applied to the carbon atom and it reacts with oxygen in the air. More complex hydrocarbons are created when more carbon atoms join together. Then the energy amount also increases.

In 2015 Norway produced 114 billion standard m3 gas from Norwegian fields. About 95% goes to export via the gas pipes in the North Sea to the United Kingdom and the European continent.

Natural gas is a potential driving force in future, green Norwegian industry. New technological solutions make it ever more possible for the process industry to use natural gas to improve production and reduce emissions. Tjeldbergodden is a veritable shopping window for all the possibilities natural gas provides. Refinement of Norwegian natural gas to hydrogen is just one of many exciting pilot projects which are in the startup phase.

The potential for further development is enormous. Tjeldbergodden has a unique position to push development of new, sustainable and profitable industry forward, based on Norwegian natural gas delivered directly though the Haltenpipe. There has already been built significant industrial competence in the commercial cluster, with the methanol plant already providing substantial values. This cluster has the potential to become world-leading.

Natural gas is used for a range of different applications in Europe. We can divide the use into two overarching categories; “gas used for energy purposes” and “gas used directly in production of goods”. In residences, the gas is primarily used for energy purposes through direct heating of rooms and water and in cooking through gas powered hobs. Direct use of gas is far more common in continental Europe and the UK than in Scandinavia. There exists an extensive, well-developed, end-to-end gas-distribution system in large parts of Europe. In industry gas is used both for energy purposes, often through direct energy production in industrial plants in the form of electricity, heat or steam. Natural gas is also used for waste disposal and incineration, pre-heating of metals(especially iron and steel), drying and de-humidifying, melting of glass and in various processes in the food industry. Natural gas can also be used as raw-material in the production of various chemicals. Gasses such as butane, ethane and propane can be extracted from the natural gas and be used as raw material for synthetic fertilisers and pharmaceutical products.

In addition to the uses described above, gas is used in a range of innovative and industry-specific processes.

The industry’s gas-consumption represents around 30 % of the European gas market. Chemical and petrochemical industry is the largest gas-consumer in the industry. Here gas is used both as a raw material and in energy production. The iron and steel industry, non-metallic minerals and the food and tobacco industry are other large consumers of natural gas. In the industrial sector we have observed a falling gas consumption, mostly due to optimisation of energy use, changes in structure and a lack of new businesses.

The gas price are an important factor also for the industry. Countries who can offer gas at low prices hence have a competitive edge. 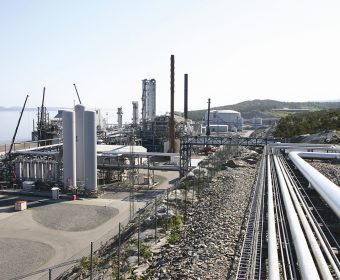 Tjeldbergodden receives natural gas from the Heidrun field in the Norwegian sea via the gas pipe Haltenpipe.

Todays capacity in Haltenpipe is ca. 2,2 billion Sm3 per year, where the methanol plant receives natural gas equivalent to roughly 1/3 of the total transport capacity.